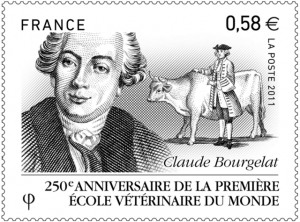 This year the world celebrates the 250th anniversary of the start of the veterinary profession. Veterinarians owe the birth of their profession to Claude Bourgelat, a French equestrian expert and keen scientist.

Living in the French city of Lyon, Bourgelat was a director of the Lyon Academy of Horsemanship. Apart from his equine skills, he also took an active interest in horse anatomy and through his association with medical surgeons in Lyon he conducted many dissections and took it upon himself to review the anatomy of the horse. Bourgelat was also a renowned writer and soon took to writing scientific articles on horsemanship and farriery.

It was through Bourgelat’s friendship with nobles and people of influence such as Henri Léonard-Bertin, Administrator of the region of Lyon, that the impetus for the opening of a veterinary school first came about. King Louis XV wanted to educate farmers and help prevent cattle diseases, and so Bertin initiated some agricultural reforms, including proposing a veterinary school be opened in Lyon and suggested Bourgelat for director.

So on August 4 1761, Bourgelat was authorized by the King to open a school to teach “the principles and methods whereby livestock diseases may be cured”, and students were admitted from early 1762. It wasn’t until June 1764 that this school was given the title of Royal Veterinary School. Bourgelat later also started a veterinary school in Paris, at Alfort. Together, these schools produced all the founders of other European veterinary schools.

William Tyson Kendall – who trained as a vet in the United Kingdom – is widely acknowledged as the founder of the Australian veterinary profession. Kendall started a private veterinary college in the Melbourne suburb of Fitzroy in the late 1880s, though that is not to say there were not other veterinary surgeons already working in Australia. The Australian Veterinary History Society has documentation suggesting that there were veterinarians working here from the mid-1800s.

With 2011 being the 250th anniversary of the veterinary profession’s beginnings in France, this year is also designated World Veterinary Year. The French postal service is celebrating by issuing a commemorative stamp featuring a portrait of Bourgelat. In March this year, the Australian Parliament recognised the diverse contributions of the veterinary profession to the nation with motions tabled in both the House of Representatives and the Senate.

“Veterinarians have pivotal roles in biosecurity, quarantine, government policy initiatives, legislation and regulation, certification of imported and exported food products, and working to protect native wildlife and improve the health of indigenous communities,” he said.

There are now seven veterinary schools producing veterinary graduates, with the most recent to open at the University of Adelaide. Figures from 2009 show that there are almost 8000 veterinarians working
in Australia, with the majority in companion animal practice.

The veterinary profession in Australia has produced an array of remarkable veterinarians who have contributed not only to the advancement of animal health and veterinary medicine, but also in the areas of public health and biosecurity. Notably, Australian immunologist Peter Doherty was the first veterinarian to be awarded a Nobel Prize, in 1996 for work on the discovery of the process by which the immune system recognises virus-infected cells.

As veterinarians we can all help to celebrate this exciting anniversary of our profession. Across the world, there are many events planned through-out 2011 to celebrate the 250th anniversary of the veterinary profession, culminating in the International Closing Ceremony of the World Veterinary Year at the 30th World Veterinary Congress in Cape Town, South Africa in October. You can find out more information at the Vet 2011 website: www.vet2011.org