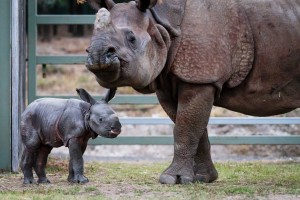 Zoo Keepers are closely monitoring both mother and calf, and although it is still early days, report that both are doing well.

“Amala is being very protective of him,” Unit Supervisor Jennifer Conaghan said. “She is keeping her distance from us and keeping the calf close, which is what we expected to see. In the last couple of days Amala has brought the calf into a behind the scenes yard, and we’ve been able to monitor things more closely.”

“We have seen the calf suckling and although it is still only days old, we are extremely happy with the situation so far, and absolutely thrilled to have this new addition on the ground.”

“This birth is a credit to years of work by the Zoo’s dedicated Life Sciences team to successfully introduce the two, an introduction which has produced a healthy calf following Amala’s 15 month gestation,” Taronga Western Plains Zoo Director Matthew Fuller said.

“We’re the only Zoo in Australia to have three species of rhino, and three successful rhino breeding programs, so critical for these species that are all threatened in the wild.”
The Greater One-Horned Rhinoceros is classified as vulnerable on the IUCN Red List with as few as 2700 animals left in the wild.

This birth follows the arrival of a Black Rhino calf at the Zoo earlier this year.

Amala and her calf will remain behind the scenes for the coming weeks where they can continue to bond.