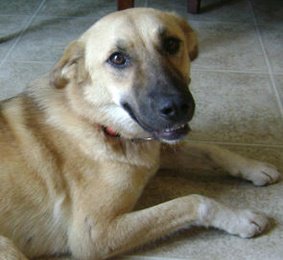 An apparent breakdown in euthanasing procedure has led to the death of a ‘war hero’ dog in Asa Grande, Arizona last month.

A worker from Pinal County Animal Care and Control has been suspended following the incident that ended the life of Target, a mongrel who was adopted by U.S. soldiers in Afghanistan.

It is claimed Target became popular after she and two other dogs frightened a suicide bomber inside a military base at Dand Patan near the Pakistani border, potentially saving a number of lives.

Though the bomber detonated his explosives at the entrance of the military facility, he was unable to kill anybody.

Target was owned by U.S. Army medical officer Sergeant Terry Young, who brought the animal home following his tour of duty. The animal escaped from Sgt Young’s property, and a neighbour contacted the animal shelter that collected her.

Though Sgt Young found a picture of Target on a website used by dog catchers to help owners located lost pets, by the time he arrived at the shelter the animal was dead.

It is believed the shelter employee picked the wrong dog for lethal injection administration.

When it comes to euthanasing an animal, there are some clear-cut procedures to follow,” Ruth Stalter, director of Pinal County’s Animal Care and Control division, said.

“Based on my preliminary investigation, our employee did not follow those procedures.”