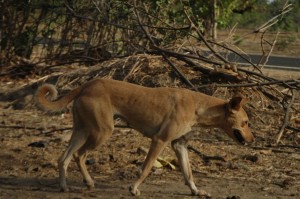 Following a political and humanitarian crisis in Nigeria in 1971, some French doctors came together to form a group called Médecins Sans Frontières (MSF). MSF – also known as Doctors Without Borders – has been involved in many significant crises like those in Rwanda, the Congo, and Bosnia. In its wake, a number of other “Without Borders” organizations have arisen. One of these is the Australian-based Vets Beyond Borders (VBB).

VBB focuses on Asia and the Pacific. In India, where I was fortunate recently to work as a volunteer (alongside an Australian colleague), VBB has been conducting sterilisation and training programs to limit the incidence of rabies in humans and animals. Tragically, India has up to 30,000 cases of human rabies per year, many of whom are children. Mostly this is due to an enormous street dog population that transmits the lethal and incurable virus through dog bites.

In many places around the world, the response to this health hazard has been to cull animals en masse, achieved variably through gassing, drowning, electrocution, shooting, beating, or mass confinement. In contrast, VBB has an anti-culling policy. Instead, they have adopted a program called ABC-AR, or Animal Birth Control and Anti-Rabies. In this program male and female dogs are humanely caught, sterilised, vaccinated for rabies, treated as needed, and returned to their place of capture.

But why not cull the dogs systematically to eliminate the scourge of rabies rather than allowing this reservoir for the disease to remain on the streets? VBB’s alternative approach is the consequence of two main beliefs. The first relates to its ethical values and the second to its understanding of the facts and the evidence.

VBB argues that culling programs are typically unsuccessful and unsustainable. Why? Because when dogs are removed from one area, neighbouring dogs tend to move in and claim that territory as their own; whereas when de-sexed animals are returned to their former turf they prevent potentially unvaccinated animals from taking over. VBB point out, for example, that in the last few years since the ABC-AR program was introduced in the city of Jaipur (where I worked) there have been no human rabies cases.

The selection of this approach is also a consequence of a central ethical value held by VBB, namely, the vital need to improve the health and save the lives of people in developing countries. The other central ethical value it holds is the importance of animal health and life. Both these values inform the nature of the ABC-AR program in opposition to other solutions like mass culling.

It is not just that VBB regard the lives and welfare of animals as morally important – though of course they do. They also recognise the need to be respectful of the moral and religious beliefs of the communities that live with the street dogs. In India, where Hinduism and Buddhism have had much influence, opposition to killing even stray animals can be profound. We might agree that it would be highly offensive for an authority or a humanitarian group to ignore such moral values in the local population.

Furthermore, there is an obvious need to be morally sensitive to those whose work involves the animals – vets, paravets, and the Animal Welfare Board of India. Many people from these groups oppose euthanasia even when animals are suffering. And while VBB supports euthanasia, it does so only when the animal is incurably or unbearably suffering (or rabid and very dangerous). Euthanasia, that is, is not sanctioned as a tool for population control. It is also worth mentioning that a rabies control program which deploys the ABC-AR approach rather than culling is far more morally rewarding for the international volunteers and local vet staff who work with the animals.

It is not just the type of program but the details of the program that are affected by the values of the organisation which implements it. For example, there is often a need in developing countries to teach humane animal handling techniques (no nooses etc.) and sound surgical and medical principles. I think it is also wise to open up a dialogue with the local veterinary trainees on topics like animal welfare and ethics. When the trainees return to their places of origin, they may continue the dialogue with their colleagues and thereby propagate awareness of animal ethics and welfare.

As I mentioned, VBB argue that the evidence supports the efficacy of the ABC-AR plan. Suppose, however, that emerging evidence shows that mass culling may be as effective in limiting rabies as any non-culling method. Perhaps it also promises to be cheaper. Should VBB then consider changing its approach and adopt culling? I think there is a case for saying it should not. For not only would that switch fail to pay due heed to their values regarding animals, it would also disrespect the values of various members of the Indian community. But in any case, a lethal program may be less likely to garner enough support to be viable or successful in the long term.

One Reply to “Vet Ethics: Canine culls – some considerations”