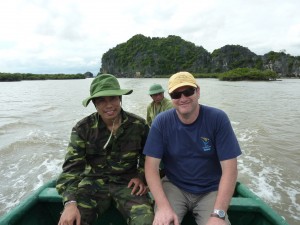 Taronga senior veterinarian Larry Vogelnest is involved in an ambitious mission to save Vietnam’s Cat Ba langurs from extinction.

Cat Ba langurs, also known as Golden-headed langurs, number about 50 in the wild and are exclusively found on the island of Cat Ba in Northern Vietnam.

Vogelnest applied for the task after reading an advertisement that was distributed worldwide on internet listservs.

“I thought it looked interesting and challenging, and ended up getting one of the two positions available, and in the end they asked me to choose the second vet, somebody that I was happy to work with,” he said.

“I immediately thought of Michael Lynch from Melbourne Zoo because we have done a lot of work together, he has had experience in projects in southeast Asia, and was happy to be involved.”

Vogelnest and Lynch previously worked together in 2006 on the import of Thai elephants to Taronga and Melbourne Zoos for a breeding program.

Cat Ba langurs have primarily been threatened by recreational hunting, and are generally not sought for food or medicinal products.

“I heard their bones are used to make monkey balm sometimes, but generally shooters pick them off high limestone cliffs they live on; they prefer to live on cliffs that face the water, so from a boat you look straight on to these big cliffs and they are easy targets,” Vogelnest said.

Males are most commonly shot as they are more inclined to reveal themselves in order to protect family groups.

Other factors in the low numbers are disturbance of agriculture and aquaculture, development for tourism, as well as forest fires.

The majority of the population is on a small protected part of the island in the south east, and that population has stabilised over the last few years.

At the end of 2000 Munster Zoo and the Zoological Society for the Conservation of Species and Populations (ZGAP) formed a partnership with Vietnamese conservationists and the Cat Ba Langur Conservation Project was initiated.

“Fortunately hunting has stopped since then and the conservation project has raised awareness of the plight of the animals,” Vogelnest said.

“A number of locals are employed in a langur guard program, and the last known hunted animal was killed in 2004.”

Though the population has stabilised, there is also some fragmentation with two small female only groups living on the island’s northwest.

The animals in the fragmented group Vogelnest worked with late last year were two females who became stranded 20 years ago after mangroves which connected the main island to a smaller one were cut back for fishing farming purposes.

There were many more in the group two decades ago, and they have gradually died out from shooting and natural causes.

The object of Vogelnest’s last trip to Cat Ba was to capture and move those animals to the larger langur population.

“It was an enormous challenge and a lot of preparation went in to it, including a very detailed master plan that encompassed the whole procedure,” he said.

“There was a lot of bureaucracy, government departments and health issues relating to the humans involved; we wanted to make sure nobody was carrying any nasty diseases and we also wanted to test the animals so we could get some base line health data.
“There is no health data for this species at all, and nobody has looked at normal blood parameters or parasites.”

After developing protocols and finding laboratories that could run tests, the next priority was organising the darting of the langurs.

“Since it’s difficult to take a pistol or a rifle in to Vietnam, we had to use something that was already there, so we went with a blow pipe,” Vogelnest said.

Another considerable hurdle was catching the monkeys in rugged terrain on a large island.

Cat Ba langurs sleep in caves at night, and reliably use a rotation of a few locations. Fortunately one of their preferred caves was relatively accessible. A camera trap was set up in the cave to monitor their use of the cave.

“However the cave was 15 metres up a vertical cliff face, the floor area was 1 metre square, the entrance about 1.5 metres by 2 metres, and inside there was a vertical chimney that went up about 7 metres,” Vogelnest said.

Prior to Vogelnest arriving on the island, local conservationists and a climbing company set up the infrastructure to access the cave.

When he went to inspect the cave in June, a 10 metre bamboo ladder and a 7 metre rope ladder had been acquired to access the cave.

“I’m not so keen on heights, so it was pretty scary but I did get up there,” Vogelnest said.

“Obviously I was concerned about coming back and doing the job for real and insisted on having harnesses and safety ropes to prevent us potentially plummeting to our deaths.”

Upon returning in October the local crew had acquired the necessary safety equipment as well as a customised net made in Germany that fitted the opening of the cave and could be pulled shut once the langurs were inside.

The team then planned five days shifts for two people to survey the caves which were accessed by rowboat and a 20 minute walk up a valley to the cave.

“By the fourth day of watching the cave we were getting a bit bored of watching nothing for hours, but at about 4.10pm the two langurs showed up, and thankfully were not bothered by our presence, because they were somewhat used to people being around after the ladder and rope were put in place (months before),” Vogelnest said.
“At about 5.40pm they both bolted in to the cave, and it was quite dark by this stage. It was quite nerve-wracking to make the decision to close the net.”

After pulling the rope to secure the animals, Vogelnest returned to base at the home of a local fish farmer (who is also a langur guard), and called his colleagues with the news.

The rest of the team arrived at 4am.

Vogelnest approached the darting with some trepidation as he was unsure of how the animals would react.

Once in the cave, the team discovered that both langurs were in a small cavern at the very top of the seven metre “chimney”.

“I had to climb up the chimney and balance on a tiny ledge to dart them,” Vogelnest said.

“Both the climb up the chimney and the darting were challenging, however in these circumstances the adrenalin kicks in and helps you get the job done.”

After the first langur was darted it was carefully lowered to the ground in a custom made basket where Lynch was ready to stabilise the anaesthetic and commence the examination and sample collection.

Vogelnest descended to assist before returning to the cave to repeat the procedure for the second animal.

“It was a great relief once we’d secured the animals in pet packs ready for the trip to the release site, about a two and a half hour boat ride away,” he said.

“A relief also to have accomplished the procedure without harming the two animals that represented per cent of the total population of this critically endangered species.”

The langurs were fitted with UHF/GPS collars, and tracking of their movements commenced immediately.

Six days after the release it was noted the animals had been joined by a male and female from another group and were also observed mating.

Some of the samples the team took remain in Hanoi in a cold storage freezer, and efforts are being made to complete permits to get them to Germany for DNA work and disease screening.

Vogelnest said he and Lynch are extremely keen to publish the results of their efforts because there is so little information about Cat Ba langurs.

“We want to disseminate the information on the anaesthetic protocols, health data and the radio tracking data, so as soon as Michael and I get the information we’re going to work on it, then head back to assist with translocating five other female langurs who are stranded on a peninsula due to human activities,” he said.

“I have been receiving some correspondence about that part of the project, and it’s looking increasingly likely we will get to it at some point during this year.”

In addition to assisting the Cat Ba Langur, Vogelnest said the program has educated the local community about the worth of all wildlife on the island.

“They have done a great job and it’s been nice to be involved in a project where there is a real potential for a tangible positive conservation outcome,” he said.

“We might actually see that this species will pick up and do okay after being critically endangered and regarded as one of the 25 most endangered primate species in the world.”
SAM WORRAD