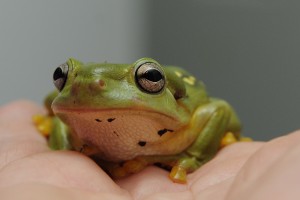 Amphibians are uncommon veterinary patients, partly thanks to restrictions on keeping them in certain areas, but also due to an overall decline in frog numbers worldwide.

Even so, Stephen Cutter, at the Ark Animal Hospital in Palmerston, treats a handful of frogs every year.

“Frogs are still common in NT as chytrid fungus doesn’t seem to have hit,” he said. “The fungus also prefers cooler temperatures which is why it hit worse in alpine areas of the tropics as well as more temperate regions.”

The most common frog species he sees is the green tree frog (Litoria caerulea).

“This frog has an almost commensal lifestyle with people – many have resident green tree frogs on their veranda or living in the outdoor toilet and are quite fond of them, treating them as pets. I think this is why they tend to bring them in when they are injured”.

Like their dog and cat counterparts, frogs present for a range of reasons – typically trauma, but also infectious disease, parasite infestations and gastrointestinal disease. They are also sensitive to metabolic bone disease, as reptiles are.

Cutter made world headlines when he performed reconstructive surgery on a female tree frog whose dorsal skin had been removed by a lawnmower. The frog, Victa, survived and was eventually released back into the wild.

So it was not at all unusual for Cutter to be presented with a pet frog that had suffered a rectal prolapse.

The magnificent tree frog (Litoria splendida) is truly magnificent to behold – it’s skin is bright green, it has large golden eyes and white to yellow spots all over its dorsum. Their large toe pads are designed for climbing. But not everything about them is lovely. They boast a large, fluid filled sac on the top of their head – a poison gland designed to deter predators such as birds.

“Magnificent tree frogs are part of a growing trend of keeping pet frogs – especially since the wild ones have disappeared in many areas. They are close relatives of green tree frogs and just prettier.”

Magnificent tree frogs have an extremely limited geographic distribution, being found only in the Kimberly region in the north-west of Western Australia, but they are commonly kept as pets in the Northern Territory.

The patient in question, Kermit, was a class pet whose presenting complaint was “having a raspberry come out of its bum.”

Kermit lived with one other frog which was unaffected. He was fed an appropriate diet of commercially sourced insects, kept in a humidified enclosure and seemed otherwise bright and well. The “raspberry” had appeared 24 hours prior.

Cutter identified the raspberry as a rectal prolapse. These can occur in frogs for a range of reasons, including parasitosis, gastrointestinal impaction or obstruction, metabolic derangements (particularly hypocalcaemia), neoplasia, trauma and systemic toxicity. There were no palpable abdominal masses.

There was no history of trauma, however Cutter never rules this out – particularly in a class pet which may be the victim of an overzealous embrace.

“The patient was bright and systemically well, so it didn’t appear that metabolic derangements, GIT obstruction, cancer or toxins were likely,” Cutter said.

Impression smears of the prolapse may reveal nematodes and ova but weren’t performed initially.

“Basically I just reduced the prolapse with a cotton bud soaked in water soluble lubricant, and the tissue easily slipped back into the cloacal orifice.”

And in it stayed. Cutter wormed both frogs to rule out parasitosis, and this seemed to work – no one reported the return of the raspberry.

Some months later, Kermit re-presented. This time on physical examination there was a loss of body condition, a palpable, large abdominal mass, and what appeared to be a friable rectal prolapse. The frog was in serious trouble.

A radiograph revealed a series of apparently discrete radiopaque objects in the abdomen, probably in the gastrointestinal tract. The “prolapse” came away on a swab and was identified as mucoid diarrhoea. Whatever was inside Kermit had to come out.

Undaunted, Cutter – who also consults for the Territory Wildlife Park – had performed several exploratory celiotomies in frogs before.

Inducing anaesthesia in amphibians is challenging. The local anaesthetic MS-222 (tricaine methanesulfonate ethyl-14-aminobenzoate, an isomer of cocaine) is widely reported to be the ideal agent, but isn’t always on hand when frog anaesthesia is required. Anaesthesia is typically achieved by placing the frog in a 2 per cent solution, 5mm deep, allowing the anaesthetic to be absorbed via the skin. Recovery is achieved by rinsing the patient in tap water.

An alternate method is to soak a cotton ball in an inhalational anaesthetic such as isoflurane and place into a container with the frog until it loses consciousness.

Prepping frogs for surgery is challenging as they have delicate skin which is easily damaged. Exotics veterinarian Robert Johnson recommends the use of dilute chlorhexidine which is then rinsed off with saline. Alcohol should never be used to prep frog skin.

Cutter performed the delicate midline celiotomy, immediately exposing the foreign “body”. On first inspection it appeared like a solid rock, begging the question of how such a large object made its way into such a small frog.

On handling the object crumbled. On closer inspection it was identified as vermiculite, a silicate material frequently used in reptile and amphibian enclosures. Vermiculite absorbs and gradually releases water, providing humidity. It is favoured for incubating reptile eggs as it prevents desiccation.

But it also contains metallic components, such as aluminium, magnesium and iron which explains the radiographic appearance in this case – as well as potentially toxic effects. Vermiculite has been associated with nephrotoxicity and hepatotoxicity in some reptiles and amphibians that have actively ingested it. And ingest it they do. In one report, three frogs died after being placed in a reptile enclosure containing vermiculite bedding. On post-mortem all had distended stomachs containing the bedding material. Histopathology revealed toxic changes to hepatic and real tissue.

Pathologist Rick Last believed that the renal lesions were likely due to raised serum magnesium levels, while hepatic pathology might be attributed to vermiculite-induced alterations to the gut-flora, leading to expression of bacterial toxins and hepatotoxic effects. Similarly, Aluminium binding of proteolytic enzymes may reduce absorption of nutrients.

On the basis of his findings, Dr Last concluded that while it might be suitable for incubating the eggs of reptiles and amphibians, vermiculite should not be provided as bedding material.

Kermit was lucky. There were no grossly obvious changes to organs found on exploratory celiotomy, although blood was not taken to assess renal or hepatic analytes.

Kermit spent another week in hospital recovering quietly. As he was initially reluctant to eat he was syringe fed with small amounts of Hill’s a/d.

“We use that a lot for reptiles and amphibians as it is very easy and contains almost everything they need,” Cutter said.

Once Kermit’s appetite returned he was served a selection of crickets and cockroaches lightly dusted with calcium powder.

Kermit was returned to the school, to the great relief of the class. The magnificent frog with a penchant for eating vermiculite now rests on alternative bedding, and has returned to the hospital several times – though without clinical signs.

“They keep bringing Kermit in so we can see how well he has recovered,” Cutter said.