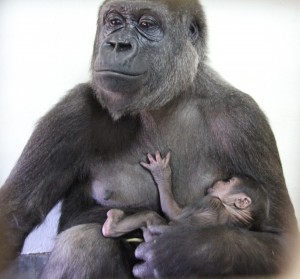 A new gorilla named Mjukuu was born at Taronga Zoo on Tuesday October 28.

The baby boy was born to female Mbeli and male Kibali, and things are going well according to gorilla keeper Vera Nedved.

“Kibali is starting to take his role of silverback more seriously,” she said.

“He briefly checked his son after the birth and now he is protecting and guarding Mbeli; our vet can vouch for it, having witnessed Kibali’s growing protective silverback skills.”

Nedved said Mbeli is under supervision, and a human obstetrician was on standby in case of emergency or birth complications.

The birth went smoothly, the baby is suckling well, and the new arrival represents the “culmination of the hard work of many people.”

“It was a very emotional moment for everyone,” Nedved said.

“It is symbolic as well, as our first baby in the group born to the first offspring from the original group [of gorillas].

“It is the second generation in the making.”

Mbeli was born at Taronga in February 2003, and was the first baby gorilla born to the original group led by male Kibabu.

“Her mother Mouila was Kibabu’s favourite female and history is repeating itself in her daughter Mbeli,” Nedved said.

“She is Kibali’s favourite female as well.”

Kibali was selected by curators on recommendation from a species coordinator, and “after mountains of paperwork” he was brought to Taronga from France.

Two females from Melbourne Zoo came to Taronga to meet Kibali, the first of which was Mbeli, who originally came from Taronga but had been moved to Melbourne Zoo.