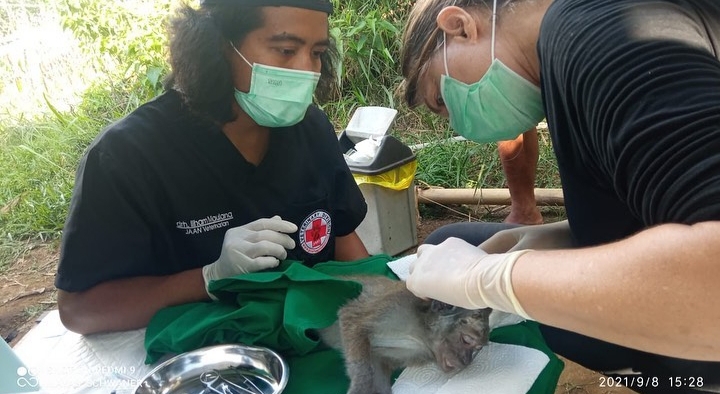 The Ellis Park animal sanctuary has reached its funding goal for building materials, having received 65,300 Euros (more than $100,000 AUD) in donations.

The Sumatran sanctuary is a ‘forever home’ for animals with injuries and trauma, and its recent fundraising campaign involved auctioning of memorabilia from musician and park co-founder Warren Ellis.

Ellis Park has completed its perimeter fencing and is now building enclosures and a fruit storage room.

Park co-founder Lorinda Jane said one of the enclosures is for a monkey with no arms named Rina, and further facilities for sun bears are in construction.

“The enclosures will be fairly big spaces, 30 metres by 30 metres, so they’re a nice big space and they’ll have little ponds to play in, trees to climb on and it will be as natural as possible,” she said.

“We’re thrilled with how fast it’s progressing; the Sumatra Wildlife Centre is next door, and it took them two and a half years to raise the amount of money we’ve been able to raise in two and a half months.”

The sanctuary’s Instagram has attracted attention for its news about future Ellis Park resident Julio, a juvenile macaque who suffered severe head trauma and other wounds after being beaten.

“We do a daily update on Julio because everyone is so concerned about this tiny little monkey; he’s lost sight in one eye and the images from when he first came in were quite gruesome,” Jane said.

“The story of Julio shows what Ellis Park is about, because if it wasn’t for this place there would be nowhere for little monkeys like him to go and that’s why the centre is so important.”

Ellis Park has decided to build a veterinary clinic half-way between its facilities and the Sumatra Wildlife Centre so that both sides can access the equipment.

The sanctuary’s next aim is to cover monthly running costs for feed, care, and essential services.

“When travel permits, we’ll accept volunteers to the centre to do gardening and help feed the animals, that’s all in the pipelines,” Jane said.

“So many great things are happening over there at the moment; we’re looking at more land as well.”