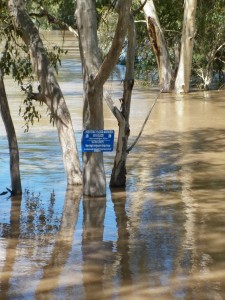 The NSW Department of Primary Industries (DPA) and the Australian Veterinary Association (AVA) have advised flood-hit communities to be prepared for animal welfare issues.

“When the floods are on, a lot of animals are standing in water, so hooves become softened, which can lead the way to foot abscesses, especially when access to stock becomes limited due to the water,” she said.

Cavanagh said the combination of flooding and warm weather could also pose problems. “The big thing I have been putting warnings out about out here is that with hot weather there is a big increased risk of internal parasites and fly-strike in sheep,” she said.

“It’s worm time anyway, and a lot of stock were lost last year to Barber’s Pole worm. With all this wet weather and lack of access, it’s important to remember that those worms can lay 10,000 eggs per day.”

“Pet owners should definitely keep an eye out for heartworm in these conditions,” she said.

“Be prepared for possible disruption to services, including power, water and phone lines for extended periods of time. Bring pets inside and move horses and livestock to safe ground,” he said.

The AVA made a number of suggestions to livestock and horse owners, including securing all loose objects, and to make sure horses and livestock have access to a safe food and water source.

The AVA also suggested that the reliance on automatic feeding systems can be hazardous as power may be lost.

In an effort to escape rising water, wolf spiders have been climbing grass en masse and letting out vast webs.

Scientists claim they are doing so in the hope that strong winds will catch them and transport them to a more habitable location, a practice known as “ballooning”.

In coastal areas there is concern that deoxygenated water re-entering rivers via flood plains can affect oxygen levels, with the potential to suffocate fish and other animals.

Though initial tests show the current floods have not caused large losses of life, Southern Cross University researcher Damien Maher said in extreme cases it can kill all the creatures living in the water.

Maher told AAP that the full extent of the damage from the current floods will not be known until the waters subside.

Information about protecting pets and livestock is also available on the AVA’s website.