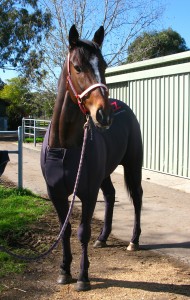 In early April 2012 champion sprinter Hay List, a six-year-old thoroughbred gelding – at the time the highest rated male sprinter in the world and the only horse to ever get close to beating Black Caviar, – underwent surgery for colic at a Sydney equine hospital.

On recovering from he was found to be non weight bearing lame in the near fore leg with swelling about his carpus. Soon after radiographs revealed Hay List had severely fractured his carpus and the owners and trainer were advised he would never race again and that even his survival was at risk. Opinions were obtained from leading equine surgeons around the world with advice ranging from do nothing and hope, to carpal arthrodesis and even euthanasia.

The horse was put into a tube cast and then returned to trainer John McNair’s property at Somersby on the Central Coast of NSW. Here he came under the care of specialist equine surgeon Nicholas Kannegieter and stable vet Brett Jones. On his return he was still Grade 4-5/5 lame, had extensive firm diffuse swelling around the left carpus, pain on even mild flexion and greatly reduced range of motion.

Further radiographs confirmed the severity of the injury revealing a comminuted fracture of the intermediate carpal bone with crushing and fragmentation of the proximal articular surface, multiple avulsion fractures from the caudal aspect of the distal radius and proximal radial, intermediate and ulnar carpal bones, crushing of dorsal articular surface of the radiocarpal and third carpal bones and damage to all major ligaments resulting in joint instability.

A treatment plan was formulated which took into consideration the high probability the horse would suffer catastrophic injury to the carpus if he underwent anaesthesia too soon. In light of this the leg was placed in a full limb support splint which provided good support and immobility to the carpus. The hope was that the major fracture of the intermediate carpal bone, which was minimally displaced, would heal without further distraction. At the same time some healing and fibrosis of the ligaments would provide better stability while the severe swelling would reduce.

Waiting also gave Kannegieter and the staff at Agnes Banks Equine Hospital, where Hay List was scheduled to have surgery, time to plan details of the procedure. As the fragments were in difficult to access locations in the caudal aspect of the radial carpal joint Kannegieter spent many hours practising the approach on cadaver legs at Charles Sturt University in Wagga. A further vital fact was that until such time as the horse was observed to be able to get up and down unhindered then it was considered too risky to anaesthetise him again.

The horse progressed well and nine weeks later, on June 13, 2012 Hay List underwent the first of three planned arthroscopic surgeries. As it was considered there was still a high risk of further fracture on recovery the plan was to keep the anaesthetic time for each procedure to less than 1.5 hours. It was also decided to recover him unassisted, with a moderate carpal bandage, in a very quiet, darkened recovery box. Fortunately all went well and Hay List recovered very well. There was immediate improvement following the first surgery. The second surgery occurred on July 25 at which time some larger fragments, which had been identified at the time of the first surgery, were removed using a combination of arthroscopy and arthrotomy.

Unfortunately against veterinary advice the trainer elected to have stem cells, harvested from fat adjacent to the tail, injected into the carpal joints. The horse had a severe synovitis reaction with a sudden increase in heat, swelling and pain about the carpus. The joint fluid turned dark red. The third surgery on August 29 was brought forward to flush the joints as a result of the synovitis as well as to debride areas of cartilage damage that were known to be developing. During surgery hyaluronic acid (Enhance 20 mg) was injected to minimise the ongoing synovitis and assist in cartilage rehabilitation.

The horse continued to improve very well after each surgery to the point where he had progressed from having no chance of returning to racing to having at least a 50 per cent chance. Over the next few months the trainer commenced light exercise and eventually started a training program through December and January. As exercise intensity increased Hay List received regular medication primarily consisting of intra-articular Enhance, intravenous Enhance before gallops and racing, PBZ after all fast work as well as regular icing of the joint and feet.

Hay List confounded everyone by having his first track gallop at Gosford on February 5, 2013 and by then winning an official barrier trial at Randwick on February 12. This was a remarkable comeback for a horse with such a severe injury.

During this time however Hay List was troubled by a deep infection in the left hind hoof, most likely a result of a penetrating injury in the sulcus of the foot. This injury became more troublesome than anything else. Despite the foot problem Hay List had his first start in the Group 2 Challenge Stakes at Warwick Farm on March 16. He showed great early speed but faded in the last 100 metres to finish a very good fourth in a race that broke the track record. The next race was the Galaxy two weeks later but the ongoing foot problem meant he had to be scratched.

Hay List’s next race was the TJ Smith Stakes at Randwick on April 13, against Black Caviar in front of a sell-out crowd. Despite starting well Hay List faded badly and the jockey stopped the run well short of the finishing line. The jockey reported the horse had made a severe abnormal respiratory noise as they straightened for home. The most likely cause is considered to be dislocation of the soft palate, but further tests in the week after the race will be required to confirm the diagnosis and organise a treatment plan. This was a cruel blow for a horse that had made a remarkable comeback from an injury which seemed certain to end his career, if not his life.

Hopefully the breathing problem can be resolved and Hay List can return to his best in the near future.