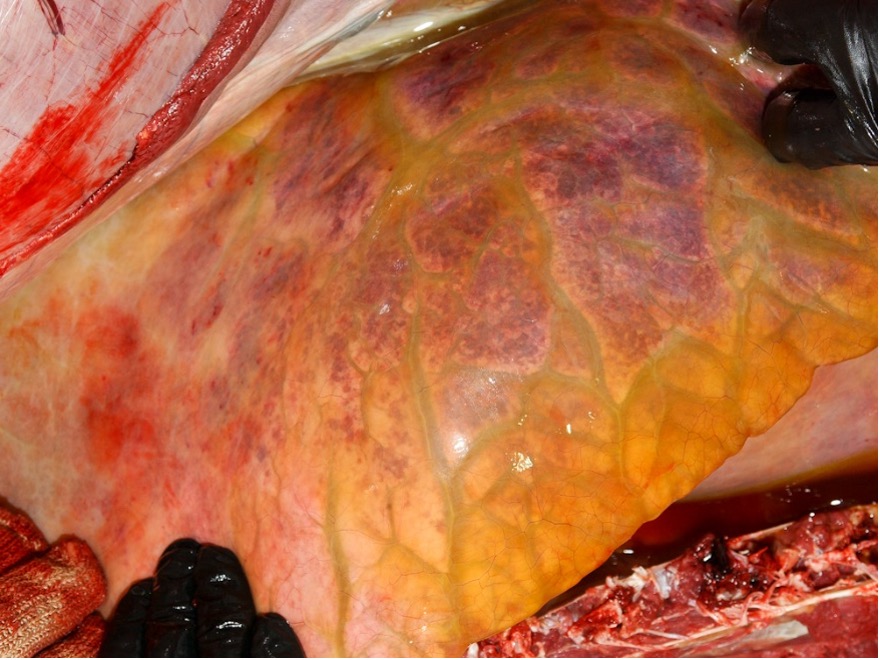 African horse sickness virus (AHSV) is a highly pathogenic arbovirus with the potential to cause severe, often fatal, circulatory, and respiratory disease in horses. It is a nationally notifiable disease that is exotic to Australia. Historically the spread of African horse sickness (AHS) has been limited to Africa with occasional outbreaks in Europe, making the recent incursions of AHS in Malaysia and Thailand of particular significance. Horses are most severely affected, however all species within the Equus genus are susceptible, including donkeys, mules, and zebra. Zebra are considered the natural hosts and act as a reservoir by having an extended period of viraemia whilst exhibiting few or no clinical signs. Disease with mortality has been observed in dogs following ingestion of infected horse meat. Seroconversion has also been observed in camels, however there is no evidence to suggest camels contribute to the persistence and spread of the virus.

AHSV is a double stranded RNA virus belonging to the family Reoviridae, genus Orbivirus. There are nine serotypes and it is morphologically similar to Bluetongue virus. Prior to incursion of serotype 1 in Thailand, outbreaks have been associated with serotypes 4 and 9.

AHSV can survive a few hours in carcasses but is readily inactivated once the carcass pH falls below 6.0 as part of the normal decomposition process.

The distribution of AHSV is dependent on the presence of a suitable vector and equid host. In Africa the principal vector is the biting midge Culicoides imicola.

AHS is endemic across central Africa with regular spill-over into southern Africa. In the past century there have been outbreaks in Africa, the Middle East, Asia, and Europe. In March 2020 Thailand reported its first case of AHS which is suspected to be due to the importation of infected zebras. The most recent incursion of AHS occurred in Malaysia. The mode of entry and serotype is currently unknown, and investigations are ongoing. More information is available on the OIE website (OIE 2020).

AHS is transmitted by biting midges of the Culicoides genus. The Culicoides midge ingests blood containing the virus from an infected horse. The virus then migrates to the salivary gland of the midge before being transmitted when the midge next feeds on another horse.

C. imicola is the only confirmed vector in Africa however C. bolitinos is strongly suspected to act as a competent vector. Although C. imicola and C. bolitinos are exotic to Australia there are several other Culicoides species endemic to Australia which could potentially serve as AHSV vectors. Of concern is C. brevitarsis which is a vector of Bluetongue virus and Akabane virus.

Although AHSV has been demonstrated in equine semen and embryos, the significance of this is unclear. There are no records of transmission of disease by reproductive material.

There are four recognised clinical presentations of AHS

Viraemia lasts 4-8 days (maximum of 21) in horses, 4 weeks in donkeys and 6 weeks in zebra. This prolonged period of viraemia in donkeys and zebra contributes to their success as maintenance hosts.

In rare cases of recovery, horses develop antibodies against the infecting serotype providing a degree of immunity to reinfection with that serotype.

AHS should be on the differential list for horses presenting with fever along with severe respiratory and cardiovascular symptoms, as well as sudden death. Laboratory testing is required for definitive diagnosis as AHS can appear similar to other diseases including Hendra, piroplasmosis, and equine viral arteritis.

Samples to collect for laboratory testing include:

The post-mortem lesions vary depending on the disease form. In the pulmonary form, lesions include interlobular oedema of the lungs (Figure 1), hydrothorax, hydropericardium, frothy discharge within the trachea (Figure 2), oedema of the lymph nodes, and petechial haemorrhage on serosal surfaces. Occasionally congestion in the renal cortex and oedematous infiltration around the aorta and trachea may be seen.

Post-mortem findings for the mixed form are a combination of the pulmonary and cardiac lesions.

Risk to Australia of introduction of AHS

Introduction of AHS virus to Australia could occur through an infected equid or a live infected vector.

While importation of a viraemic equine host is possible, Australia’s import conditions significantly reduce this risk by prohibiting the entry of equids and equid genetic material from countries with AHS.

Windborne spread of vectors is possible as Culicoides can travel up to 700km over water in windy conditions. Research is underway in northern Australia to identify what Culicoides species feed on horses and whether they are competent vectors.

If AHS were to occur in Australia the policy as described in AUSVETPLAN is to eradicate the disease through activities such as movement controls, insect vector control, surveillance, appropriate carcass disposal, and a public awareness campaign.

Methods of vector control include removing suitable breeding areas such as stagnant water and damp shady areas, cutting grass short, strategic use of insect repellents and insecticides, and stabling horses in midge proof enclosures. C brevitarsis also feeds on cattle and can survive in cattle dung allowing them to be less dependent on outside water sources than many Culicoides. Therefore, separating horses from cattle may reduce the risk of exposure to C brevitaris.

For further details on Australia’s response policy, see the AUSVETPLAN AHS manual located on Animal Health Australia’s website: www.animalhealthaustralia.com.au/our-publications/ausvetplan-manuals-and-documents/. This manual is in the process of being updated, with the revised version expected to be completed in 2021.

Australia has never had an outbreak of AHS and maintains its AHS-free status through biosecurity policies and border controls. Australia has strict import conditions for live equids, genetic material, vaccines, and other commodities that may be contaminated with AHS virus or Culicoides.

Australia continues to monitor the global spread of AHS to ensure these biosecurity policies and import controls are appropriate. The Northern Australian Quarantine Strategy (NAQS) conducts surveillance of feral horses and donkeys, monitoring for any suspect deaths and early warning signs. NAQS also contributes to the National Arbovirus Monitoring Program for Culicoidesvectors of Bluetongue virus, another key feature in Australia’s surveillance for potential AHS vectors.

How Australian veterinarians can help

Although the risk of AHS entering Australia is low, the global distribution is changing, and it is important that Australian veterinarians maintain current knowledge and remain alert to exotic disease risks such as AHS. Prevention and early detection and laboratory confirmation are vital and veterinarians have an important role to play to ensure a rapid and effective response.

Veterinarians should report any unusual or suspect cases of emergency animal diseases to a state/territory government veterinarian or by calling the Emergency Animal Disease watch hotline (1800 675 888).

To read past issues of the Emergency Animal Disease Bulletin, visit this page.

This article originally appeared in Emergency Animal Disease Bulletins and was provided by the Department of Agriculture, Water and the Environment.