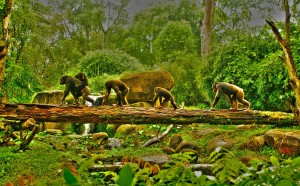 The competition, open to staff and students at Murdoch University, drew more than one hundred photo entries featuring an array of wildlife from African carnivores, to marine mammals, birds, insects and zoo animals.
Hong won the competition with his image of a family of primates walking across a fallen log in the jungle.

Second year Biomedical Science student Samuel Montgomery was awarded second prize with his evocative image of a Tasmanian Devil and first year animal science student Ian Barron took out third prize with a cleverly composed image of two birds. Sen Hon Won’s stunning underwater image of a fish under a jetty on Mabul Island in Malaysia won the People’s Choice Award voted by those who had viewed the exhibition of photographs. The winners received a gift voucher to The Finishing Touch Gallery in Fremantle.

Veterinarian and photographer Phil Tucak judged the photography competition and gave students a presentation about his photography including some tips and advice on taking photos. Tucak said the photographic entries in the competition were of a very high standard which made judging difficult.
“There were so many interesting and captivating shots, which highlighted the quality of the photography, making it hard to choose the winners,” he said.
“Many of the African photos are taken on the annual Veterinary Conservation Biology trip organised by the vet school, whilst other students travel to Africa and other countries whilst on holiday or when returning home,” Murdoch University Wildlife Association President Crystal McClay said. “It goes to show that great pictures can be taken anywhere from your backyard to thousands of kilometers away.”
The Murdoch University Wildlife Association was established in 1995 as a special interest group for veterinary students of all years, but members now consist of students studying through-out the university and it boasts 93 members, making it the largest special interest group within the veterinary school. The competition photos were displayed in the veterinary school common room and are also added to the Association’s website.

Over the last three years the photography competition has been used as a fundraising event for the Murdoch University Wildlife Association to sponsor a turtle nest in the Kurma Asih Turtle Conservation Project in Bali. Money was raised by charging a gold coin donation for people to vote for their favourite photo.

“Apart from raising money I feel that the competition encourages our membership and the wider university community, to get out there and be involved with wildlife which hopefully gives them a greater understanding of and empathy towards wildlife,” McClay said.