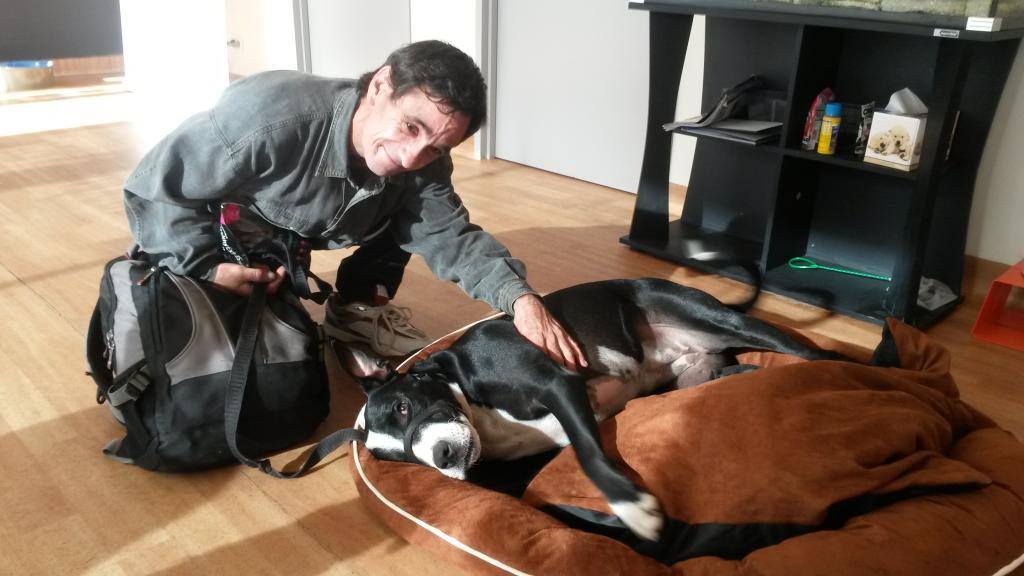 One day back in 2009, having just enjoyed a family lunch in Woolloomooloo, Sam Kovac was walking back to his car when he came across a homeless man with a cattle dog. The cattle dog was coughing so badly it was having difficulty breathing, and Kovac – then a veterinary student – stopped to ask whether the man had taken the animal to a vet. He said he had been to two veterinary clinics, but that because of his appearance and the vets’ assumption that he had no money to pay for treatment, no one was willing to examine his dog.

Meeting the homeless man and his cattle dog proved to be a lifechanging experience for Kovac, who began thinking about companion animals of homeless people of Sydney. He realised companion animals of underprivileged owners were no less loved than other pets, but the lack of funds to obtain or pursue treatment for their animals placed financially disadvantaged owners in an awful position: they felt that had to bargain over the life or death of their pet. Kovac knew there were several wonderful animal welfare charities operating in Sydney and elsewhere, but he recognised these organisations generally focus on rehoming pets – not so much for providing for medical and surgical care for them when they fell ill. “I thought that if the public could contribute money to a fund, I could use this fund to cover the cost of procedures and medicines for the pets of the homeless,” Kovac said. “I contacted a number of pharmaceutical representatives and they quickly got on board providing vaccines and anti-parasite products at no cost, which helped a lot”.

Before too long, the Southern Cross Compassionate Fund and Project HoPe were born.

Project HoPe (Homeless Pets) was launched on the steps of Sydney Town Hall in October 2014 and has been growing successfully ever since. With support from Uniting Care, Mission Australia, Jewish House and the City of Sydney, the service is financed by donations made to the Southern Cross Compassionate Fund. Operating out of Kovac’s practice, Southern Cross Veterinary Clinic, in the inner-western suburb of St Peters, Project HoPe has helped hundreds of Sydney’s least fortunate. For every dollar donated by charities, other organisations and the public, Southern Cross Veterinary Clinic matches each donation dollar for dollar – and when funds run low, Kovac contributes his own money to the fund to keep Project HoPe alive.

In addition to providing medical and surgical services to the pets of the homeless free of charge, Project HoPe gives food and preventative products to those in need and provides advice to the homeless on how best to look after their pets. On occasion, companion animals are collected and cared for when their owners are hospitalised and unable to secure alternative pet care. In the lead up to each winter, Project HoPe conducts vaccination drives to ensure companion animals of homeless people are protected from common diseases, thus preventing the spread of zoonoses and improving the prospect of both homeless pets and their owners remaining physically healthy.

Just as importantly – if not more so – the services offered to Sydney’s underprivileged by Project HoPe ensures that the bonds between underprivileged people and their pets remain unbroken. As City of Sydney Lord Mayor Clover Moore pointed out at the launch of Project HoPe, “for many of our homeless, their pet is their companion, their friend, their solace and support. The bond they have with their pets is the strongest tie that many have, and it is precious for their physical and mental well-being.” Several years down the track, Kovac is quick to echo this sentiment. “These animals are often the last thing in these underprivileged people’s worlds, and to be able to be the difference between life and death for them is a very lofty place for a vet to be. I consider it to be a great honour to know that directly, my work in helping these companion animals makes a massive difference to the lives of those living rough on the street, as the bond between human and animal in this scenario is so valuable.”

For Kovac, working with the less fortunate in the community has thrown his own comparative position into sharp relief – not only in financial terms, but also in relation to the choices he is able to make in his life and work. “I’m very privileged in that owning my own practice, Southern Cross Vet, I am able to decide what activities to get involved in and what new services to offer,” he said. “I always had strong ambition to start my own practice so I could set the high standards that I expect the profession should reach towards. Since starting Southern Cross Vet, I’ve developed an interest in minimally invasive surgery and am aiming to grow this part of our practice.” Kovac identifies expanding Project HoPe and the keyhole surgery part of his practice as being “the two major areas that I have gotten a thrill out of being a vet recently.”

Being a veterinarian is the only career path Kovac can ever recall wanting to pursue. “I always remember the story going around in our family about when a friend of the family came over when I was aged three, and I was riding a toy tractor around the back yard,” he said. “The friend asked, ‘Oh, do you want to be a farmer, Sam?’ and I barked back, ‘No, I am going to be a vet!’” Raised by a single mother in Sydney’s Eastern Suburbs, Kovac was surrounded by animals as a child, including dogs, guinea pigs, rabbits, ferrets, chickens and goats. He attended Reddam House, which has campuses in Bondi and Woollahra, and graduated from school as a NSW Top All Rounder before studying Veterinary Science at the University of Sydney. “I was never interested in the science of medicine until I started university,” Kovac said, “but as soon as I developed clinical skills I became infused with the passion of problem solving and working up cases to find a solution.”

Since completing his degree in 2011 and subsequently launching Southern Cross Veterinary Clinic, Kovac has relished the challenges posed by veterinary practice. One case that stands out as a highlight for him was a dog who presented with an unresectable mast cell tumour and nasal adenocarcinoma – and Kovac was the third veterinarian from whom the owners had sought an opinion regarding treatment. “The owners were given no ope and euthanasia was the only option given, and I thought it would be worth pursuing unique treatments such as radiotherapy, which ended up curing the patient,” he said. “Having them visit me four years on is amazing.”

Kovac appreciates being able to make connections with the animals he treats and their owners in his work. “I really enjoy developing strong bonds with the families who are attached to their companion animal friends,” he said. “Watching the puppies grow into dogs, and being there for them when they fall ill –knowing that with my hands and my heart I can heal them is an incredible feeling.” Like most vets, however, Kovac is also cognisant of the challenges associated with providing such care. “It’s a great skill to know when to stop treating a patient and let them go,” he said. “I still struggle with end of life care in patients I have been seeing for years.” That said, Kovac believes the positives far outweigh the negatives when it comes to patient care – particularly in relation to the veterinary work he provides via Project HoPe: “Almost every interaction with a homeless client’s companion animal friend through Southern Cross Vet stands out for me as a highlight.”

Another source of inspiration for Kovac is the partnership that has developed between Project HoPe and Jewish House in Flood Street, Bondi. “Being brought up Jewish, I’ve got a strong commitment to community and charity,” he said. Once Project HoPe was up and running, Kovac was invited to become directly involved with Jewish House, constructing kennels in their facility to house companion animals of those who seek refuge there. “Up until working in this space I had no idea how many women suffering from domestic violence who had pets were left with only two choices: leave and got to a women’s refuge while leaving their pets with the abusive partner, or stay in the bad relationship and at least still be with their pets,” Kovac explained. “Being able to set up Jewish House to be pet friendly, with Southern Cross Vet providing the medical care for these animals in residence, has meant we have now seen hundreds of women escaping violent relationships with their pets, to the only pet-friendly safe haven in Sydney.”

Working to make Jewish House Sydney’s first and only pet-friendly crisis prevention centre is an achievement of which he is justly proud. Having recognised the importance of companion animals to individuals escaping domestic violence, Kovac is now considering lobbying other shelters via Project HoPe to consider providing pet friendly accommodation. He is also keen to see Project HoPe grow to a point where the program can offer funds to any vet in Australia and New Zealand who approaches them seeking to provide surgery or treatment for the companion animal of a homeless client. Ultimately, however, the people Kovac has encountered and the experiences he has had since starting Project HoPe have “led to a firm appreciation of all that I have in life, and this drives me to work harder each day.”

Just the other day, Kovac was walking back from a meeting in the Sydney CBD when he encountered a homeless man sitting on a mat with a donation box, trying to raise funds to help his sick dog. “In the pot were only a few coins,” he said. “I stopped and knelt by the man, whose name was Benjamin, and asked what was wrong with his dog. He replied that he had visited clinics nearby to seek help for his dog, Hairy Legs, who had been limping on his back leg for a week. They diagnosed a cruciate rupture, which for a homeless gentleman with no insurance would be very difficult to correct surgically – especially with only a few coins in the donation box.”

Hairy Legs is now due to have surgery on his injured knee next week, when he will be picked up in the Project HoPe Rapid Response Vehicle and taken to Southern Cross Veterinary Clinic. Dr. Levein, the specialist surgeon at Southern Cross Veterinary Clinic, has agreed to waive the thousands of dollars usually required for the fee for the operation, and Project HoPe will foot the bill for anaesthesia, titanium implants and any other surgical costs. Finally, Hairy Legs will be cared for until he has recovered sufficiently to be delivered back to Benjamin, reuniting two companions who care for each other very much. “And that,” Kovac says, “is what Project HoPe is all about.”

Donations to the Southern Cross Compassionate Fund can be made here.
JAI HUMEL